A case for reading fiction

Is your young reader one of those who prefers to read about “real stuff”? Are you? Our library is filled with books about amazing, inspiring, thrilling, adventurous, and intriguing information. I grew up without having heard of Ada Lovelace – one of the important early thinkers who led us to modern computer science – but now I have two biographies I can direct students to. I have a fascinating book about the women’s land army during World War II and another about scientists working to save the endangered Amur leopard. So with all this information begging to be read, explored, and learned, why do I spend time introducing our children to fiction?

I read poetry to the 3rd-graders because it stretches their imaginations. They wondered aloud what a vorpal sword could be when I shared Lewis Carroll’s “Jabberwocky.” Maybe, they surmised, a vorpal sword is gold-plated. Maybe it is long and strong. Maybe it is magic. Maybe, I suggested back, it is whatever you need it to be so that our hero can use it to slay the Jabberwock. Their imaginations continued firing as we waved around our vorpal swords.

That spark of imagination your child is developing by reading poetry might just be the thing that helps us imagine and invent our way out of some global problem in another 15 years.

I read fiction to our students so they can develop empathy. The 1st-graders talked about what it feels like when an adult does not believe you after finishing John Patrick Norman McHennessy: The Boy Who Was Always Late by John Burningham. True, none of us has ever been chased by a lion on the way to school, but we all can remember the feeling of telling an adult the truth but having the adult refuse to believe us. And the 2nd-graders had a lot to think about after we read Jamaica Tag-Along by Jaunita Havill. Most of the students have had the experience of being excluded, but we realized, after some conversation, that most of us had also been the excluder at some point. Maybe seeing the experience from two sides will give us the new perspective we need on the playground or the soccer field or the family-room rug around a game of Apples to Apples.

I like to imagine that Ada Lovelace and Steve Jobs and Thomas Jefferson all read fiction as they learned about the world and the humans that inhabit it. 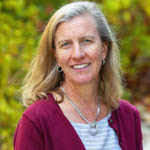 Maeve Knoth came to PBS as our librarian in 2013. She is a 4-H community leader, a woman of many diverse talents (including pickling and jam making), and (obviously) an avid reader. Before joining our community, she worked for many years for the San Mateo County Library as a children’s librarian, and in her distant past, she worked at Buckingham, Browne, and Nichols School; the Cambridge Public Library; and Katherine Delmar Burke School.